Did You Know These Tech Inventions Are Canadian?

Posted July 01th, 2019 in How Technology is Changing Our Lives, tech, inventions

Today is Canada Day, so why not celebrate Canadian tech inventions. Keep reading to see how many you knew were Canadian. 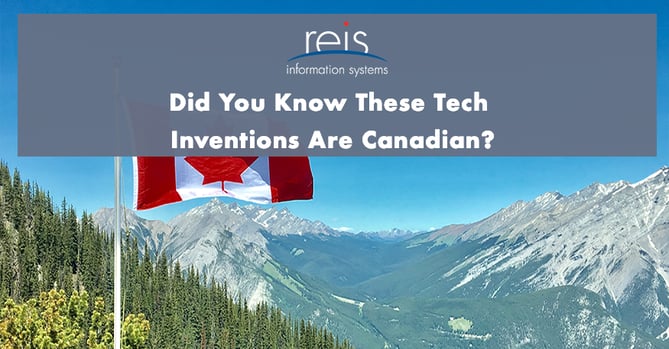 Canada is home to many great things. Maple syrup, poutine, scenic locations, wonderful people, and great sports teams (Go Raptors!). The country is also home to some ground-breaking tech inventions that have changed the world.

Here is a collection of some of the most influential tech innovations - that you may or may not have known were created by Canadians.

This was invented by Frederick Banting, Charles Best, and James Collip in 1922. Banting read medical papers that hypothesized insulin. Once insulin is isolated and extracted, it could be used to treat diabetes. Banting and Best started to perform experiments on the pancreases of dogs. The pancreas was removed, and the dogs showed symptoms of diabetes. Then, the pancreas was sliced and ground up into an injectable amount. When injected a few times a day, the dogs regained health. Collip, a biochemist, then joined the team and helped with purifying the insulin for testing on humans. As they say, the rest is history.

Quebec-born Reginald Aubrey Fassenden, was the first to transmit the sound of a human voice to another location without using wires - this was in the early 1900s. The first broadcast was a Christmas concert to a group of ship crews that were sailing in the Atlantic and Caribbean Sea. The first message using a human voice and being transmitted via electromagnetic waves was "one, two, three, four. Is it snowing where you are, Mr. Thiessen? If it is, telegraph back and let me know." Fassenden then went on to gain 500+ patents, including ones for sonar and radio technologies.

We all know that in 1877 this communications device and technology was invented by Alexander Graham Bell. The entrepreneur used his interests in speech and hearing with the deaf to further his studies in sound transmission. He then went founded Bell Telephone Co., which still exists as the largest technology company in Canada called BCE Inc. It's crazy to think that if it hadn't been for Bell and the telephone, the smartphone that so many of us rely on might never have come to exist.

One of the inventions that Canadians can be most proud of is the life-saving pacemaker, which was developed by electrical engineer John Hopps. Hopps based his device on research from Dr. Wilfred G. Bigelow and Dr. John C. Callaghan. In 1950 he was able to develop the first cardiac pacemaker. Through research, the team discovered that the heart could be artificially restarted if it stopped because of cooling. Since the first version being implanted into a human in 1958, the pacemaker has been saving many lives.

Do you like going to the movies and seeing a movie in IMAX? Maybe you even saw Avengers: Endgame in IMAX. There are 3 Canadian filmmakers that we can thank - Grahame Ferguson, Roman Kroitor, and Robert Kerr. These 3 individuals built an art installation in 1967 for Expo 67 in Montreal. They developed a projector that could make films come alive, and display a movie 10-times larger than was possible using 35mm frames, while maintaining quality.

Chemical engineer Lewis Urry invented both alkaline and lithium batteries in 1954, while he was working for the Eveready Battery company. He was tasked with figuring out a way to extend the life of zinc-carbon batteries. He decided to find a more cost-effective solution instead of trying to reinvent old technology. He was able to figure out a way to combat both issues of power and cost. Today, there are alkaline batteries can last even longer that they did years ago. Urry's first prototype battery, and the first commercially-produced cylindrical battery are on display at the Smithsonian Institution - located in the same room as Edison's light bulb.

BlackBerry wasn't the first handheld device. But it still innovated in that category since the parent company Research in Motion (RIM) invented the small device that became the computer in your pocket. This invention changed the course of mobile communications - more specifically the BlackBerry Messaging (BBM) service. This allowed the phone users to engage in text-based conversations with each other in real-time. No tiresome SMS (texting), but the ability to have a true line-by-line encrypted conversation. Sadly, with BlackBerry's unwillingness to license the service to other companies led to the development of computing services. Some of these include: Kik, WhatsApp, and iMessage. While you can download BBM to any smartphone, the service is now only a minor option in the real-time, instant messaging market. Still, BBM started it all.

When it comes to appliances, Canada is a leader in the outdoor world. Canada is especially good at developing appliances to combat the mountains of snow we can get in many provinces and regions. It's not a surprise that a Canadian, Arthur Sicard, first came up with the idea of a snowblower. He invented the machine back in 1925, saving the backs and arms of Canadians from the horrible task of shovelling. Then in 1937, another Canadian, Joseph-Armand Bombardier, invented the snowmobile.

Donald L. Hings, invented the two-way communications device for the Canadian military during World War II. The devices, known then as a pasket, made communication back and forth in real-time, simple, and convenient. Today, there are more improved walkie-talkies that are being used by the military, businesses, and adventurers. You can also get apps that function like a walkie-talkie through apps; such as Voxer.

You know when you see an awesome play in a sports game, and you wish to see it again? Thanks to instant replay, you can. This technology was developed by CBC producer George Retzlaff. It went on to first appear during a Hockey Night in Canada broadcast in 1955. This was done by using a tele recording replay several minutes after the original clip aired live. The development of the instant replay led to slow-motion replay, making every at home sports fan a referee as they watch a replay of a situation in slow motion to determine the right call. In this day and age, every TV and remote has the features of pause and rewind.

While today we have computers that have trackpads and touch screens, many years ago, we needed a way to navigate. In 1949, engineers Tom Cranston and Fred Longstaff with colleague Kenyon Taylor, developed the first trackball. They used a 5-pin bowling ball. While the idea originally was to develop something that could be used for World War II radar (called DATAR), trackballs are found in many things, such as computer mice.

Wheelchairs have helped those with mobility issues. But, the electric wheelchair? That was a game changer when George Klein invented it back in the 1950s. This invention was meant to serve veterans who fought in World War II, but today, electric wheelchairs help all kinds of people who need mobility assistance.

George Klein has another major invention up his sleeve. A computer arm, also known as the Shuttle Remote Manipulator System (SRMS). This was used on NASA's Space shuttle in 1981. The arm in 15m long, has flown on 91 shuttle missions over 30 years, capture and repaid satellites, position astronauts, maintain equipment, and move cargo.

Happy Canada Day readers! We hope you have learned more about these Canadian tech inventions.

Any comments and questions can be left in the section below.